Ground Penetrating Radar (GPR) devices for concrete scanning emit electromagnetic pulses into a concrete slab and record the echoes of those pulses to build an image. The resulting image can be used for locating rebars before drilling cutting or coring, investigating unknown structures, determining concrete thickness, imaging rebar geometry and several other applications.

The Proceq GPR Live is a light weight and easy to use device for concrete scanning which is connected wirelessly to an iPad. The equipment produces high resolution scans up to a maximum depth of 700mm by using a stepped frequency antenna which covers a frequency range of 0.2 to 4.0 GHz.

The GPR probe is built into a lightweight and robust housing which is easily manoeuvrable. The probe operates with standard chargeable AA batteries to guarantee easy battery replacements.

The GPR probe connects wirelessly to an Apple® iPad (touchscreen up to 12.9” with iPad Pro) utilizing the Proceq Live webtool to enable real-time data analysis and sharing. Utilizing the iPad application also enables the constant development of new features with the Proceq GPR Pro Live. 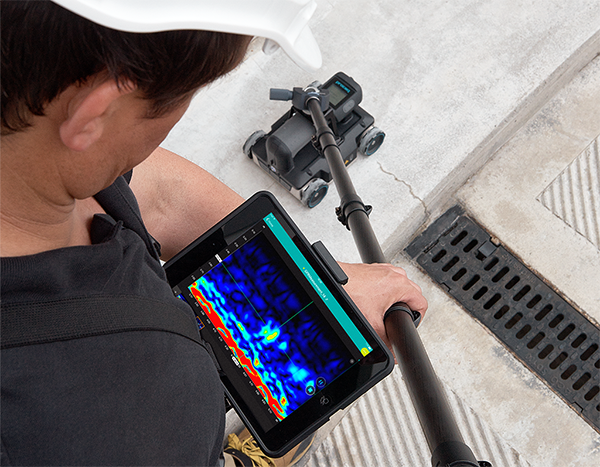 There are several handling configurations including mounting the iPad directly to the probe, using a telescoping rod or mounting the iPad on a tripod. The probe is completely independent and has a wireless range of up to 20m.

Note: Apple® iPad is not included with purchase of the Proceq GPR.

Data is collected in real-time and the user can switch seamlessly between standard non-migrated scan to the intuitive migrated “Heatmap”. It is possible to label the scan with the type of target, depth and location which leads to seamless reporting. The Proceq GPR has been built with the intention of enabling all reporting to be completed on-site to reduce time consuming post-processing.

For reporting purposes, it is also possible to view data as a depthslice / timeslice view or with an on-site 3D view.

The Proceq GPR utilizes ultra-wideband technology which enables high resolution scanning to a maximum depth of 700mm. All applications typically addressed with multiple antennas can now be covered with one single device with a frequency range of 0.2 to 4.0 GHz.

The Proceq GPR Probe connects wirelessly to the Apple iPad and all GPR scans show up in real time on the Proceq GPR Live Application.

GPR scans are saved within the Proceq GPR Application on the Apple iPad. For Proceq GPR Live Pro users, all data is saved on the cloud and linked to their user account. This enables post processing and review of data from any Apple iPad the user signs into.

The Proceq GPR Pro Live comes with Logbook which is a Professional tool for tracking all steps in the image processing. All gain and filter settings used are logged and included along with the scan. Measurements and changes are also tracked.

Comments, audio notes, pictures and geolocation can be added to the scan which provides an intuitive base for quick and detailed reporting to the client.

These are the items included with the Proceq GPR.

Sorry, there are no review yet.
Write a Review

N/A
Other
Company Page
Contact Details
You have not added this company as favorite.
Add as Favorite
Contact Supplier